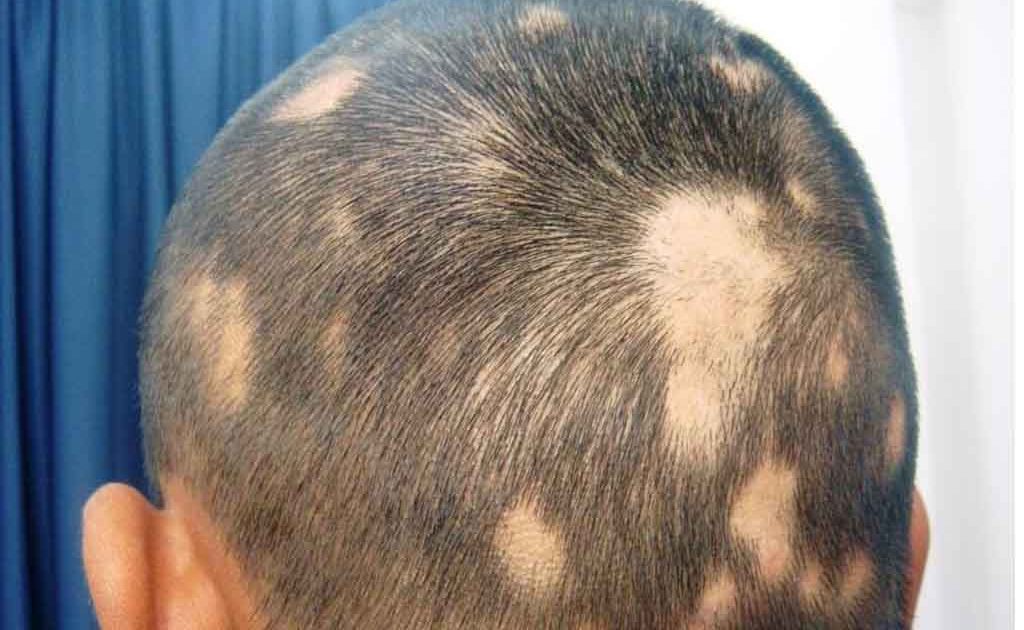 What is Alopecia Areata

Alopecia Areata (AA) is a common cause of hair loss troubling approximately 1-2% of the total population and also found in several non-human mammals. The alopecia areata is a scientific term for hair loss in which scalp loses its hair in a coined shaped structure.

AA is not physically harmful as such; hair loss can be emotional as well. The causes for this condition are still unknown. It could be the changes in the immune system of the body, which results in losing the hair from the temple or head of the head. Alopecia Areata can occur to both sexes equally and appears at all ages. Although children and young adults are the most often become patient.

Hair growth involves three phases of their hair cycle. First is the active growth phase called Anagen. Second is the involution phase called catagen, and third is the resting phase called telogen. The hair type and length is depending on Anagen. Normally, hair falls out after the telogen phase when new hair starts to develop, which is called exogen. In alopecia areata, hair falls out before the anagen phase starts leaving the hair follicle empty. This phase is known as kenogen. Hence, Alopecia areata is generally a disorder of the hair cycle process and is considered a Kenogen phase.

Other than genetic factors, Alopecia Areata has various triggering factors like stress, hormonal, and diet changes. Stress is the most affecting factor for the condition, but studies are still yet to confirm this. Emotional trauma, like the death of a family member or an emotional breakdown, has been one of the major causes of the condition in females suffering from AA.

AA is considered an autoimmune deficiency triggered by environmental factors in genetically defenseless individuals.  It displays the commonly separated patches of hair loss on the head of the person. At the start, it appears as a single patch or multiple patches in a different location. But later the patches get bigger and wider where the hair loss is totally visible to the other’s sight. Small patches merge and form into larger patches.

In ninety percent of the cases, the scalp is the most usual place where it starts. But in ten percent cases, it can start from various parts of the body which holds the hairs. It is classified on various factors depending upon the extent and pattern of the hair loss.

There are two significant varieties of AA commonly seen in individuals. Alopecia Totalis (AT) that involves the entire scalp or body hairs such as eyebrows, beard hair and pubic hair.  Alopecia Universalis is where the total amount of hairs are involved in the condition. Five to ten percent of patchy AA defines the type whether it is AT or AA.  If AA develops before adolescence, the chances of AT increases to fifty percent. In adults, the probability is usually twenty-five percent.

Typically, the exterior of Alopecia Areata is smooth and normal skin color without any skin changes like scaling and follicular changes. One in a million cases, it becomes red or peachy. The Alopecia areata can develop by various factors such as genetic susceptibility, environmental factors, and autoimmunity. It is not a contagious disease, but it can be hereditary.

Book an appointment with our certified trichologist to learn more about Alopecia treatment methods.

As central India’s first certified trichologist and leading name in trichology, Dr. Bagadia has pioneered various concepts in this segment and stands out to be Nagpur’s Best Trichology Expert. Dealing with problems related to hair loss and scalp disorders, our passion for what we do drives us towards advancements in hair restoration treatments. We are ready to give you back your hair and confidence! So get in touch with us for the best hair transplant treatment in Nagpur.